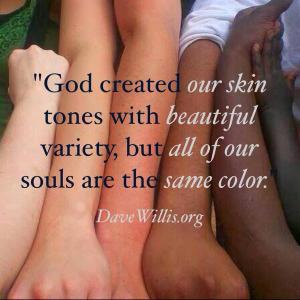 When I heard about the killings of nine people at the Charleston, South Carolina  AME church, I was sure that it was one-off situation, that the killer was just a solitary nutjob. I was sure that most Americans are not racist; this killer was just one lonely guy looking for his own private revolution that no one else cared about. But in the weeks that followed I remembered some disturbing comments from several different friends and acquaintances: “Mexicans are stupid.” “Blacks are the laziest people.” “Back east, it’s just like it used to be here – no Orientals.”

I’ve always believed that that institutionalized and personalized racism would gradually disappear as the generations of those who were in power and who therefore set the cultural tone died off. I can understand how people coming of age during a time of segregation absorb the beliefs of the culture around them; it is a rare individual who transcends the culture they’re born into. But that doesn’t appear to be happening as quickly as could be desired, to put it mildly.

These were not elderly people making those almost comically ignorant statements above – they were men in their early 50’s. White men raised in small towns on the West Coast and the Midwest. Good, decent, hardworking men, who nonetheless had enormous blind spots. The Charleston killer wanted to bring all the festering racial hatred out into the light in order to start a race war. I was sure he was wrong, that there was no festering racial hatred, but I begin to think I might be wrong. Hatred is strong word, but so are “stupid” and “lazy” when applied to an entire group of people.

But the thing is, when you keep yourself in a place where you don’t interact with people of different races, they remain Other–mysterious and scary.  My sister posted a fantastic, and fairly disturbing, article called “I, Racist” a while back. It’s disturbing because it’s so true. Take the time to read it – it distilled some vague suspicions I had about myself and my own attitudes. I’m embarrassed to say how often I group  people in boxes together. Sometimes by race, often by perceived socio-economic status. As if I have any standing in that arena.

A friend wrote I have noticed that the more I get to know a person, the more difficult they are to describe in just a few words. To me, this is the key to eliminating prejudice and hate in all its forms. Find someone who is in front of you today and love them for who they are, not for what you see, what you’ve heard or what is comfortable. Listen well.

We are all the same. Our blood is red. Our hearts are broken. Our souls cry out for something to fill us.